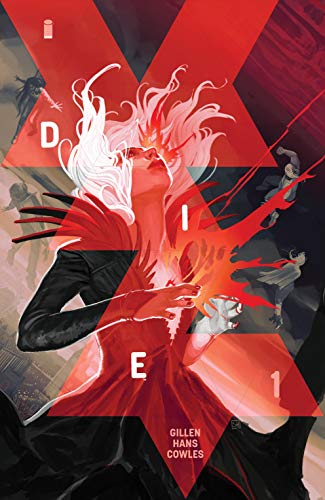 I wasn’t going to blog any more book reviews. I was done. Then I read this and I had to shout about it.

I read episode two of DIE last night. I’ve been trying to pin down what it reminds me of. I started off thinking it was like the old D&D cartoon was invaded by Neuromancer and Hellraiser with Cthulhu as the Dungeonmaster. That was a bit much though and didn’t leave room to describe the future episodes. The best I could come up with is that it was like Ready Player One for old school RPG fans. I feel like I should also be mentioning Scott Pilgrim in the description but I don’t know why yet.

I got the same feeling reading this as I did the first time I read Weis & Hickman, Pratchett, Moore or Gibson. Something about this spoke directly to my brain in a way I can’t quantify. Very rarely does a second of anything make me go back and read the first straight after. I might be getting a little obsessed by this.

It wasn’t just the story though it was the little touches. In the first issue the characters are handed their die. The  only one they can use in that adventure. In the second episode the inside cover has a picture of the character, their dice type and a two-dimensional deconstruction of their die. I loved that. That was the kind of detail that really made it pop for me.

There there was the big page of text at the end. An insight in to how the writer’s research inspired some aspects of the story you say? SOLD!